Coming on the 9th December 2014 Legacy of the Dragonwand by Daniel Peyton. 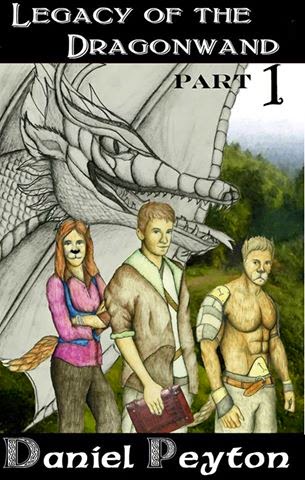 The wizard wars ended over a thousand years ago, and nearly all the ancient wizards were destroyed. The evil betrayer, the one who started the war to begin with, remains. For a thousand years he has worked his will in secret. His goal is to find the last Dragonwand so he can regain his powers as the dark dragon. Close to the king of Gallenor and master of the court, the betrayer has the nation bowing to his machinations.

Sixteen year old Markus is looking for a wizard who will give him a letter of recommendation for the college of wizardry. Unaware of the Dragonwand or the betrayer, he stumbles upon Tolen the Wise. Little does Markus realize that this man is an ancient, like the betrayer. Instead of giving him a letter, Tolen sends Markus on a journey to stop the darkness by finding the Dragonwand before the betrayer can.

Markus and the friends he meets along the way are the only ones that stand between the betrayer and the fruition of his millennium of preparation. Will Markus get to the wand first? Where are all the other wizards? Can the betrayer truly be stopped?

To pre-order go to http://tinyurl.com/ltp7vtc
To find out more about Daniel visit one of the following pages
Blog : http://thunderchicken-outofmyhead.blogspot.com/
Facebook : https://www.facebook.com/DanielPeytonAuthor
To see Daniel's other books go to http://www.barnesandnoble.com/c/daniel-peyton
I hope you enjoyed reading about Daniel and his latest book. Don't forget you can pre- order it. He'd love you to drop by his Facebook page and say Hi!
Thanks for joining me again,
Marie
www.mariegodley.moonfruit.com
﻿
Posted by marie at 06:43 No comments: