Today I have the honour of giving you a sneak peek at the cover for Brenda Perlin's book Home Wrecker before it's launch next week.

Brenda Perlin was born in Los Angeles, California in the Sixties. She studied acting and photography after high school. Later, her true passion was ignited when she became interested in health and fitness and became a fitness instructor. At twenty-nine she started writing Home Wrecker during the time she was getting married. She put her story down shortly after the wedding and didn’t pick it back up until she was forty-six and going through a divorce.

When Brooklyn meets Bo, their lives are instantly turned upside down.
Brooklyn and Bo, each unhappily married to someone else, have to decide whether to stay with their spouses or give up everything for each other. Find out what Brooklyn's husband and Bo's soon-to-be ex-wife do to break them up.


Home Wrecker is the first book in a three part series that follows the main character, Brooklyn throughout her childhood, adult life and then what seems like an “endless” journey towards redemption. 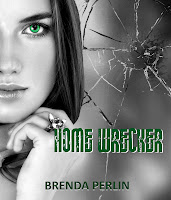 The cover was produced by JD Robinson of http://runrabbitrunfilms.wix.com/runrabbitrunfilms
Now three quick questions
What is the idea behind your books and how did you come up with it?
My stories are taken from real life. The fictional part are the names, places, and some circumstances. I don't have a great imagination but I have had enough action and suspense in my life to fill up many books.
When I first started putting together a manuscript I never would have thought I could get my work published. At the time I was getting married and feeling pressure from every angle. My writing became my savior especially when I was getting a divorce. Without it I would not have known where to turn.
What has been the best thing about having your book published?
I have been able to meet so many wonderfully gifted writers. It has been great fun and a real privilege. It can be all consuming but it has allowed a whole new world to open up for me.
Some authors need music, others sweets or coffee - What 3 things do you need when you are writing?
Sometimes I need total quiet and at other times I need loud music. It changes from day to day. I always start out with a bottle of water and sucking candies. It has kind of become a habit. I like to write with my laptop on my exercise bike. Most of the time I don't even break a sweat because I am not good at multi-tasking. I need to learn to pick up the pace and type at the same time. :-)
Thank you for allowing me to be part of your Cover Reveal Brenda and Good Luck with the launch next week. There is a Facebook Party on launch day https://www.facebook.com/events/447180968707670/456178574474576/?notif_t=plan_mall_activity
You can find out more about Brenda by visiting one of these sites:
http://www.goodreads.com/book/show/15825106-home-wrecker
http://www.homewreckerthebook.com
https://www.facebook.com/HomeWreckertheBook
https://www.facebook.com/HomeWreckerTheBrooklynandBoChronicles
http://www.amazon.com/Brenda-Perlin/e/B0088M542Q/ref=sr_ntt_srch_lnk_1?qid=1359823060&sr=8-1
https://twitter.com/HomeWreckerbook
http://www.smashwords.com/books/view/281812
http://www.barnesandnoble.com/w/8-slices-of-cake-melanie-toye/1114675541