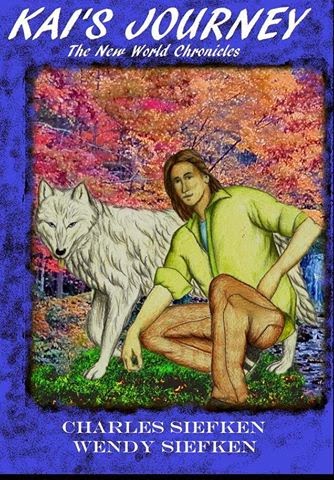 Blurb
Kai's Journey is a story about a young man, set seven years in the future. Kai has spent those years fighting for survival and trying to find a way rid the world of the disease his father created... His father was a military scientist charged with the task of perfecting a formula that would create a superior breed of soldiers. His father accidentally created a race of zombies. Like a virus, it soon spreads to the entire world, unleashing a period of unsurpassed chaos and conflict. In the midst of this turmoil, our young man comes across a young woman named Clover, who is part of a clan traveling across the United States to try to find what is left of humanity. Clover is a part of a clan of werewolves who can turn at will but aren't blood thirsty savages as depicted in general history. . Along the way they come across stragglers who join with the group as they journey across the upper part of what used to be known as North America. One night while Kai and Clover were watching a meteor shower they meet a group totally out of this world. Kai and Clover begin a heroic journey, fuelled by the increasingly dim hope that somehow, the human race will have a chance to start over.

About the authors
Charles Siefken (1992-present) is a recent graduate of high school. This is his first book of many to be published. He currently resides in rural central Iowa where he enjoys reading sci/fi books and playing video games among other things. He is currently enrolled in our local college for automotive technician as well as working part time at a local garage as a mechanic. Christopher Paolini was his inspiration to become a writer. Wendy Siefken (1966-Present) Currently working full time as a tier one tech at a local call center. Wendy lives on a farm with her family and enjoys reading, gardening and other activities with her family and friends. This all started as a school project for her youngest son and business partner, Charles Siefken, which has grown into a desire to be published.

To find out more and to purchase a copy of Kai's Journey click on the links:

Thanks to Wendy and Charles for letting me feature their book. I hope you all enjoy it.