As the launch of his book is drawing nearer I invited Bruce Blake onto the blog to give us an insight into his writing.
First off lets start with some facts about Bruce. 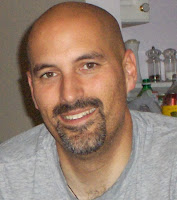 Bruce Blake lives on Vancouver Island in British Columbia, Canada. When pressing issues like shovelling snow and building igloos don't take up his spare time, Bruce can be found taking the dog sled to the nearest cafe to work on his short stories and novels.

Actually, Victoria, B.C. is only a couple hours north of Seattle, Wash., where more rain is seen than snow. Since snow isn't really a pressing issue, Bruce spends more time trying to remember to leave the "u" out of words like "colour" and "neighbour" than he does shovelling. The father of two, Bruce is also the trophy husband of burlesque diva Miss Rosie Bitts.
Over to you Bruce - what can you tell us about the writing of your book When Shadows Fall.
When I tell people I wrote the first draft of my upcoming novel, When Shadows Fall (The First Book of the Small Gods) in fourteen days, they either stare at me with a blank expression, make me repeat it to ensure they didn't mishear me and I actually said forty, or they ask me how I managed to churn out an entire novel in such a short time. Since you are not looking at me, and it clearly says 'fourteen' days in the last sentence, I'm going to assume you fall into the third group...so here's how it happened.
Firstly, it's important to realize I am a full-time writer—making stuff up is what I do. This output didn't happen in half-hour snatches here and there, but in 5-7 hour chunks of tapping on my laptop's keys. Before you stop reading because you don't have that much time to write, realize that what's most important about this output is how much I produced in the time I had—consistently about 1300 words/hour. This number—your productivity—is how all authors should evaluate the effectiveness of their writing time, with a goal of maximizing the number of words written in the time available. It can be difficult to work around a day job, family, and other commitments—and none of us can jam more hours into the day—but you can control what you do with the time you have and get the most out of the minutes you put in at the keyboard. Here are the steps I took to keep my word count high.
1.      Pre-planning. More effort went into the planning of this book than any I've ever written. For a month, as I was writing and editing another project, I spent my evenings world-building for the Small Gods series. It was really during this phase that the seeds of the story grew and blossomed. The more I learned about the background and history of this world, the more the story I was planning kept taking twists and turns I wasn't expecting.
2.      Outlining. There's always a debate amongst writers about outlining versus writing by the seat of your pants. Simply put: I find I'm more productive when I have a pretty good idea where I want to go. It means I don't lose writing time by stopping to think about what to do next. This dovetails perfectly into the next point.
3.      Daily planning. This is a tip I picked up from Rachel Aaron's great little writing book 2000 to 10000: Writing Faster, Writing Better, and Writing More of What You Love. It's a simple concept...take the first five minutes of your writing session, grab a pen and paper (that's right—the old-fashioned way) and jot down what you will be writing about. Include actions, bits of dialogue, descriptions; all the points you want to hit, plus some of the detail. This is your road map for what you will write today—not tomorrow, not yesterday, but today.
4.      No editing. Sounds funny, doesn't it? Of course I edit, just not while I'm writing the first draft. I know too many writers who never get to the end of their manuscript because they spend too much time polishing the first half of the book to perfection. Not only are first drafts supposed to suck, I know the way I write; chances are good that, if I did a bunch of editing before I finished the rough draft, something else would change and I'd end up going back to rewrite all that careful editing, anyway. Time well wasted.
5.      Unplug. The internet is not your friend. If you are writing and you can't find the word you're after, can't come up with a great name for a new character, or need to do a bit of research, bookmark it and save it for non-writing time. Seriously, it will still be there at 10 o'clock on Thursday night when there's a commercial during The Amazing Race...do it then. Don't even get me started on Facebook and email
6.      Make writing a priority. We all hear many writers lamenting that they can't find time to write. I never have that problem because I plan my writing time, then make everything else work with it. I did the same thing when I was working sixty hour weeks...the job schedule was the only thing that was inflexible, everything else had to realize I had a book to write.
With planning and forethought, it's more than possible to write quickly without sacrificing quality. Be ready, be focused, be dedicated...now go write.

Cover blurb:
A hundred hundred seasons have turned since the Goddess banished the Small Gods to the sky, leaving the land to mankind alone.
For Prince Teryk, life behind the castle walls is boring and uneventful until he stumbles upon an arcane scroll in a long-forgotten chamber. The parchment speaks of Small Gods, the fall of man, and the kingdom's savior—the firstborn child of the rightful king. It's his opportunity to prove himself to his father, the king, and assure his place in history. All he needs to do is find the man from across the sea—a man who can't possibly exist—and save mankind.
But ancient magic has been put in motion by a mysterious cult determined to see the Small Gods reborn. Powerful forces clash, uncaring for the lives of mortals in their struggle to prevent the return of the banished ones, or aid in their rebirth.
Named in a prophecy or not, what chance does a cocky prince who barely understands the task laid before him stand in a battle with the gods?
So don't forget the date :1st October. To find out more about Bruce visit his Goodreads page http://www.goodreads.com/author/Bruce_Blake where you can follow his blog and see all the other books he has published.
Thanks for reading,
Marie.
www.mariegodley.moonfruit.com
Posted by marie at 04:50