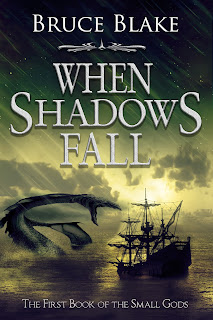 When Shadows Fall (The First Book of the Small Gods)

A hundred hundred seasons have turned since the Goddess banished the Small Gods to the sky, leaving the land to mankind alone.

For Prince Teryk, life behind the castle walls is boring and uneventful until he stumbles upon an arcane scroll in a long-forgotten chamber. The parchment speaks of Small Gods, the fall of man, and the kingdom's savior?the firstborn child of the rightful king. It's his opportunity to prove himself to his father, the king, and assure his place in history. All he needs to do is find the man from across the sea?a man who can't possibly exist?and save mankind.

But ancient magic has been put in motion by a mysterious cult determined to see the Small Gods reborn. Powerful forces clash, uncaring for the lives of mortals in their struggle to prevent the return of the banished ones, or aid in their rebirth.

Named in a prophecy or not, what chance does a cocky prince who barely understands the task laid before him stand in a battle with the gods?

www.mariegodley.moonfruit.com
Posted by marie at 02:02